skip to main | skip to sidebar

Quick reminder blog before I hop on a jet plane...

Throughout the weekend, I'll no doubt be loitering in the bar, outside in the sweltering heat, moderating various panels or doing zumba on whatever dance floor I can find, so come and find me and say hey! :)

So, this past weekend, I visited Denver, Colorado (well, sort of. We weren't exactly downtown, but close enough I guess) for the first ever Romance Readers Convention - RomCon. I had such a great time, I thought instead of rambling on and on about nothing like I usually do when I guest blog, I'd ramble on and on about my three days in Denver!

My Friday started at 3am...earlier if you count the hours my cat kept me awake. He saw the packed bags and just about lost it. I swear by Midnight, I sounded like Cartman from South Park - "Dammit, kitty I'm trying to sleep! Bad kitty! No kitty, this is my pot pie!" lol! Alas, I did manage a couple hours sleep and still made my 6am flight.

I had a layover in Milwaukee for almost two hours...just long enough to enjoy the breakfast of traveling champions - the Bloody Mary - at the airport bar. Mmmm. I also talked up my books to a few patrons, and even sold one to a fellow Bloody Mary enthusiast who downloaded it to her kindle. :)
After boarding a disturbingly small plane and a two + hour jaunt to Denver, we land in DIA...probably the worst airport on the planet. This opinion would only be reinforced later on my trip home.

Having been told that the hotel did not have a shuttle service, I hopped on a Super Shuttle.....headed downtown, an hour out of my way! Ack! Thank God I spotted my hotel's shuttle on the way, and that the driver was nice enough to go completely off her route and drop me off at the correct hotel. Which reminds me, I need to call someone about a refund...oh, anyway...
With an hour to spare, I check in and book it down to my first panel, "Anti-Heroes You Hate to Love." A fun panel with loads of great authors like Cindy Gerard, Jeaniene Frost, Jo Beverley, Lori Wilde and more! We paired off in groups and visited up close and personal with the attendees. Jessa Slade and I migrated from table to table of readers, chit-chatting about what makes a great anti-hero, the hottie Raylan Givens from 'Justified' and numerous other topics that came to mind. 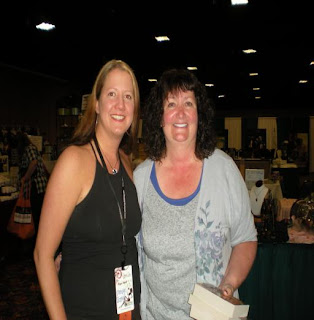 At 2pm I sat the "Question and Answer chat with FF&P Authors" panel along with the amazingly talented and sweet, Christine Feehan, Nalini Singh, Jessa Slade and CL Wilson. I think I managed to say one coherent sentence during that hour. However, I can't vouch for the other ones that babbled out of my mouth. ;) How I ended up on that panel, I'll never know. But it was an absolute honor to chat with those ladies.

Christine, being the doll she is, was nice enough to tolerate me going "fan girl" over her and posing for a picture with me. She even bought a copy of SHADOW OF THE VAMPIRE and asked me to sign it for her!! I about died. 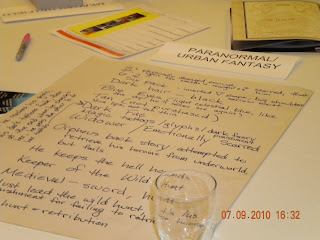 At 3pm, the next panel I sat on was probably the most fun I've had at a conference workshop..."Build a Hero" again with Jessa Slade, who at this point no doubt thought I was stalking her. *smiles* Our table, the paranormal/urban fantasy table, came up with the uber scrummy dark fae hero, Shikar. We were robbed by the historical hero for the grand prize of best hero, but we definitely built the better book! Just look at those copious notes we took! Pretty impressive, huh? :)
Here I am with some of our "Team Awesome" gals at our table. And here is another one of me waiting to give our hero, Shikar, his moment in the spotlight in front of the room. 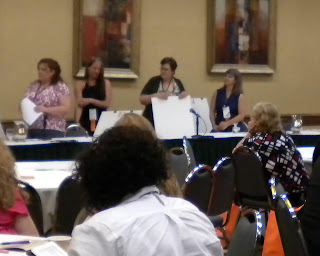 After this, I had a few moments to change before heading down to the bar for cocktail hour and dinner and the awards ceremony. A costume ball followed, you can see some of us below in our attire - I'm in the long black dress. 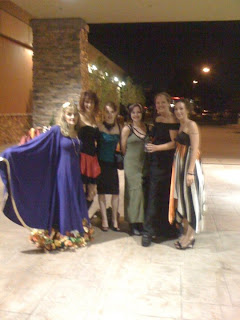 I was a Victorian Vampire (minus the fangs because they annoyed me) with a Zombie baby. He is one of my favorite Halloween accessories and was quite the hit - you can see a pic of him below. 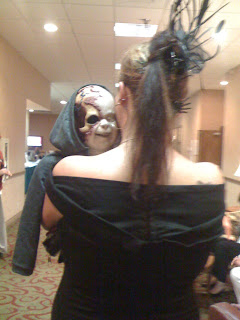 creepy baby alert!
Saturday, I had breakfast with the lovely Jen (who is pictured above in the blue-ish corset) and then headed on down to the book signing. It was set up a little odd, what with the books not being on the tables beside the authors. But even with the snafus, I counted signing almost 20 books. Yay! :)
2:30pm I sat the Were-Squares panel, with Nalini Singh, Cathy Clamp, Carrie Vaughn & CL Wilson. It was a fun question and answer game and everybody walked away with books.

I did memory lane at 3:30pm - a table area set up where readers could come over and chat with authors. Unfortunately, the signage wasn't the best. Fortunately, I got to chat with one of my favorite authors ever, Terri Brisbin for almost an hour! :)
Thirty minutes later and it's cocktail hour and dinner again. I sat next to the lovely and funny, Carly Phillips, Monica McCarty, Veronica Wolff and Jami Alden. This time dinner was followed by a Black & White Masquerade. Here's a dorky pic Carly took of me in my costume: 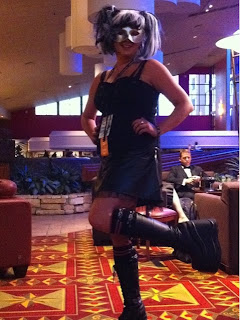 haha, seeing that picture never fails to crack me up! But in my defense, my leg is in flamingo posture so she can see my platform boots - honest!

After another night of partying, Sunday rolled around. I sat with some more wonderfully, awe-inspiring authors for the "Speed Date a New Author" event, had a great catch up chat with Wendi Darlin' at Author Avenue and then it was off for the horrible DIA airport again. The lines were unGodly long and the flight overbooked, but I made it back to my corner of the world relatively unscathed. My cat was so excited to see me, my Sunday night ended much like my Friday one - with me doing my best Cartman impression as I begged my cat to be quiet so I could sleep. ;)

All in all, I had a fabulous time at the RomCon conference, saw some old friends and met SO many great new ones. I can't wait to do it again next year!

I'm blogging today over at Vamp Chix about VILF's! Come on over and let me know who your favorite vamp is for a chance to win a signed copy of Shadow of the Vampire!

Also, the lovely Chicks of Characterization are doing a week long spotlight and giveaway, so don't forget to enter over there as well!

Until next time...
Posted by Meagan Hatfield at 4:28 AM No comments:

Don't be afraid to show 'em your shorts!

I blogged over at Harlequin Nocturne Author Blog about writing short stories today.
Swing on over and check it out! :)

Until next time...
Posted by Meagan Hatfield at 8:11 PM No comments:

Head on over and comment for your chance to win a signed copy of SHADOW OF THE VAMPIRE!

Until next time...
Posted by Meagan Hatfield at 1:41 PM No comments:

Guest Blogging and a Contest!

Hey guys!
I'll be doing a LOT of guest blogging and interviews over the next few weeks. I'll be sure to post the link over here for each of them so you don't miss out!

Until next time!
Posted by Meagan Hatfield at 10:41 AM No comments:

I just looked at the calendar...

...and about died! SHADOW OF THE VAMPIRE will literally be on the shelves in 12 days!! Eeeek!!! I'm excited and nervous and sick to my stomach all at once...sort of like this little guy: 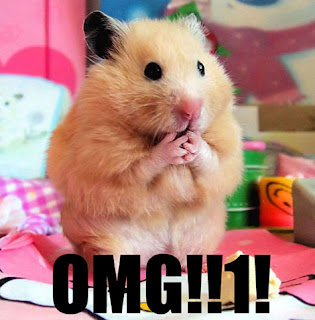 I have a feeling July is going to whooooshka right by and I won't know what hits me. I just hope I remember some of it. :)

So you know, I'm going to be guest blogging, doing interviews and of course, CONTESTS almost daily over the next couple of weeks. Be sure to check the schedule of appearances on my website so you know where to find me and when! And if you're in the Denver or Orlando areas in July, swing by one of the book signings and say "HI!"

Until next time...
Posted by Meagan Hatfield at 4:02 AM 2 comments:

Browse this book
Add to my site
Buy this book

Very Cool Graphic made by patchs_angel

"Shadow of the Vampire" by @MeaganHatfield by þ♫†Ç├|s ♫NG€∟ ツ on Polyvore.com

SHADOW OF THE VAMPIRE

Meagan Hatfield
Meagan currently writes yummy dragon-shifters and vamps for HQN and Nocturne. You can learn more about her at her website: http://www.meaganhatfield.com 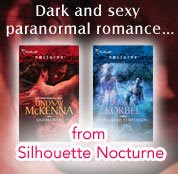